Three members of the OSU Political Science Department participate in April research symposium sponsored by the Serbian Educational Alliance, a partnership between OSU and the University of Belgrade

Three members of the OSU Political Science Department participate in April research symposium sponsored by the Serbian Educational Alliance, a partnership between OSU and the University of Belgrade 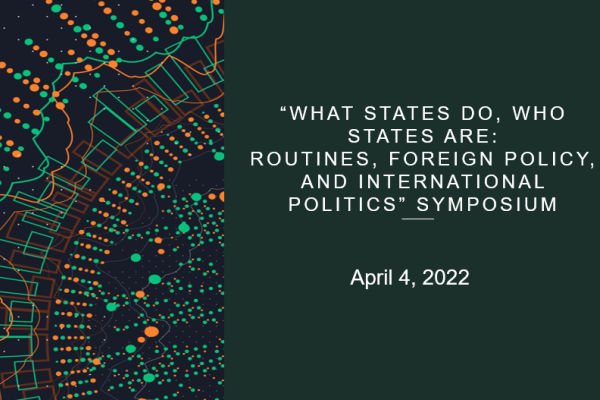 On April 4, nine scholars joined together in Derby Hall to participate in a symposium entitled, "What States Do, Who States Are: Routines, Foreign Policy, and International Politics,” co-hosted by the Department of Political Science's Associate Professor Jennifer Mitzen and Associate Professor Filip Ejdus of the University of Belgrade's Faculty of Political Sciences. The symposium was aimed at furthering collaborative research around the idea of ontological security, which highlights the importance not just of physical security but of the security of identities as a cause of conflict.

The symposium is part of a more comprehensive collaborative endeavor and came to fruition under the direction and sponsorship of Professor Angela Brintlinger, Interim Department Chair of the Department of Slavic and East European Languages and Cultures at Ohio State. Brintlinger is also the Director for the Center for Slavic, East European and Eurasian Studies (CSEEES), which houses the Serbian Educational Alliance (SEA).

According to the CSEEES webpage about SEA, "The SEA began in January 2020 and connects The Ohio State University and the University of Belgrade in an academic partnership focused on research and scholarly exchange with the goal of strengthening the existing ties between Ohio and Serbia. Funding for SEA comes from a University Partnership grant through the US Department of State and is coordinated with the American Embassy Belgrade."

Through the SEA, in April 2021 the University of Belgrade invited Mitzen to speak as part of the Political Science Lecture Series, an online event moderated by Ejdus. She presented research on ontological security and on trust in international politics, the latter co-authored with Minseon Ku.

"After the talk, he [Ejdus], Prof Brintlinger, and I discussed ways to keep the conversation going and to broaden it, since there are faculty and students at both universities interested in ontological security studies", Mitzen said. "Prof Brintlinger offered us the opportunity of a one-day symposium. From there, Filip and I worked with Ashton Kimbler, the SEA program assistant, who helped us shape the logistical contours of the day-long symposium."

Ku presented a project, separate from her dissertation, titled "Between Routines and Liminality: Diplomatic Representation as Ontological Security Dilemma."

"I presented... on how liminality (or the feeling of being betwixt and between) can be a stabilizing force for a state with competing diplomatic identity narratives," Ku noted. "I apply the concept of liminality to conceptualize a non-traditional form of diplomatic representation that can be disruptive yet routinized such that states can achieve ontological security. I use the example of the unification attache program in South Korea's embassies to illustrate what liminal diplomatic representation could look like. "

Hooser presented her fieldwork findings from her dissertation, under the title of "Violence as Peace: Stories of Everyday Masculinities, Violence, and Peace in Post-Conflict Societies."

"[My dissertation]... explores the relationship between war-linked everyday masculinities and the persistence of everyday violence in post-conflict communities," Hooser said. "Specifically, I used interviews from Northern Ireland to illustrate that ordinary people after war sometimes justify the continuation of violence in their everyday lives based on 'good guy' masculinities and an emphasis on protection, honor, and chivalry. And I argue that on the ground peacebuilding interventions need to take these 'good guy' masculinities seriously if we aim to build sustainable peace after widespread violence."

Also in attendance at the symposium:

Ejdus also presented at the symposium discussing "Routines and Routinization of World Politics.”

"...I first review the literature on routines in philosophy, sociology and political science and conclude that this subject has been neglected in IR," Ejdus said. "I then go on to define routines as a type of iterative action distinct from practices, habits, rituals, rhythms etc. Finally, I classify different types of routines, spell out what they do in world politics, and how they transform."

Additionally, Ejdus discussed how the symposium was an excellent way to reconnect and promote research.

"This symposium was a perfect opportunity to not only meet old friends and colleagues but really break new ground in IR theory and discuss the understudied role of routines in world politics."

One of the ways Brintlinger is breaking new ground for Ohio State is by connecting OSU with the University of Belgrade via a new study abroad program.

"U of Belgrade and Clemson University political science departments have a study program in Serbia for Clemson students, and we had the idea to offer the opportunity to OSU students as well," Brintlinger stated. "The English-speaking faculty at Belgrade run a spring semester program that includes courses that can transfer to the political science major: four 3 credit courses in Political Science plus one 3 credit course in International Studies. This way students who want to spend an entire semester in Europe, without language study in advance, will be able to do that while also making progress toward their degrees. We will launch in January 2023 and I'm very excited about it. Living in a non-EU European country and being able to visit the other countries of the former Yugoslavia, some of which are in the EU, will be both fun and useful for OSU students."

Brintlinger has plans to utilize the State Department grant to solidify the OSU-Belgrade partnership during this grant period, which continues through December of 2022.

"I hope to get an opportunity to apply for another grant to keep doing the work, but I’m very pleased with the great relationships and productive collaborations we have already formed," she said.

Ejdus is looking forward to brainstorming future collaborations between the two universities.

"In the future, it would be awesome to continue our research collaboration, especially in the field of ontological security studies which is a shared area of research interest,” he shared. “We could also envisage an exchange program at the graduate level, as we now have a brand new MA program on peace, security and development fully taught in the English language."