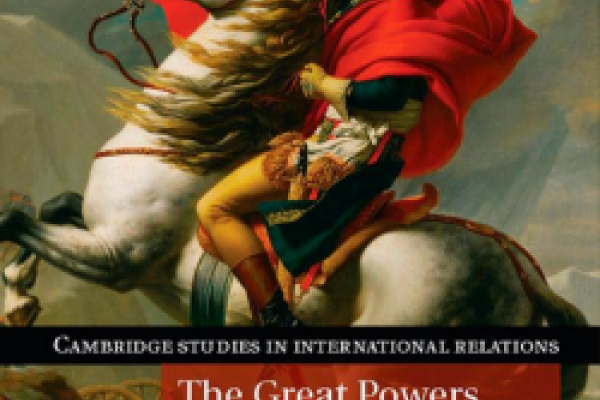 Professor Bear Braumoeller has recently been awarded the ISA (International Studies Association) Best Book Award for 2014. His book, The Great Powers and the International System: Systemic Theory in Empirical Perspective, was published by Cambridge University Press in 2013 and has also received an excellent review from H-Diplo.  Additionally, Professor Braumoeller's other work has been featured on Popular Science and National Geographic.

“This is a truly exceptional book that draws on the accumulation of knowledge on theory on great powers and the international system. Professor Braumoeller masterfully builds on the body of past research while at times modestly describes the model he presents as a "synthesis." In reality, his "nested politics model" is much more than a synthesis but represents an innovative approach to demonstrate that we do not have to choose in the agent-structure debate.  Rather, his theory presents international relations as an organic whole in which agents (states, not as block boxes, but broken into domestic constituencies and their leaders with domestic incentives) shape the international structure materially (power) and ideologically, and whose policies are, in turn, also shaped by that structure. The interaction between agents and structure, as presented in his nested politics model, is dynamic and nuanced, but not too complex to strip it from the rigor needed for the robust predictability. Indeed, in his sweeping empirical examination, Braumoeller illustrates the causal processes of his model and, at the same time, demonstrates its validity. Historically by presenting a sophisticated statistical analysis of the post-Napoleonic period up through the end of the Cold War, and then the case studies of some pivotal moments in modern history, it is as innovative methodologically as theoretically. The book impresses with the richness of ideas and command of multiple methods, while always keeping in sight the extant literature to which his work relates in a novel way. The scholarship in this book is of the highest order as it is rich in novel ideas, impressive erudition, and sophisticated empirical analysis. It is one of the benchmarks on several levels: as a study of great powers, as a general theory of international politics, and as a multi-method approach for understanding the course of history.”

To obtain a copy of the book, visit Amazon or the university library.