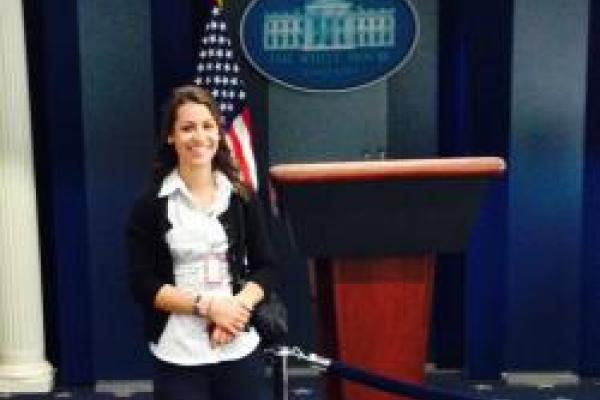 For many political science majors interning or working at the White House has always been a dream. For our recent alumna, Andrea Blinkhorn, this dream came true. Ms. Blinkhorn had the amazing opportunity to be an intern for the speechwriters for Vice President Biden, which put her directly at the heart of our government. During her time as an intern she helped work on gathering research on cities, people, and different organizations that the Vice President would be addressing. This work proved to be quite influential in helping, “identify quotes to tie themes together and ‘local color’ or pertinent facts that can be weaved into the speech.” In addition, Ms. Blinkhorn was fortunate enough to attend workshops where she had the chance to hear from other prominent White House staff.

In the statement below, Ms. Blinkhorn explains the most memorable part of being an intern and how her political science degree helped her.

“I don’t think it’s possible to nail down just one memorable moment; however some of my favorite times at the White House have happened during the weekly speaker series. The chance to listen and ask questions to senior level staff, and the President, First Lady, and Vice President, about their career journey, their take on graduate school, and any other fun facts that come up has been invaluable as I prepare for my next steps.

And by far one of the greatest experiences of the internship was my opportunity to introduce the Vice President in front of 140 of my peers at his speaker series. As the speechwriting intern, I had come to learn a lot more about the Vice President’s values and how down to earth he is through reading and listening to his remarks and observing him speak.  When I met him and had the chance to speak with him in person though, I was blown away by his sincerity and his genuine commitment to public service. A couple of other Buckeyes work with him, so the Vice President and I were able to joke about how strong our enthusiasm can be for the great state of Ohio and specifically, The Ohio State Buckeyes.

The more distance I get from my undergraduate experience at Ohio State, the more I realize how valuable many of the political science classes were in teaching me not only about issues, but how to approach a topic critically and write about it succinctly. The ability to read about complicated international theories and then parse them down into understandable arguments for debates and papers for class is an invaluable skill set.

I still think that one of the most valuable courses I took at Ohio State was Dr. Herrmann’s simulation class.  It forced all of us to act as world leaders and make decisions that affected outcomes of relations between countries and within our own.

While I am years away from being in a position where that simulation becomes reality; it is pretty incredible to think that I had the opportunity to sit only a few offices away from the people who do make the big decisions.”

Ms. Blinkhorn learned a great deal during her time as an intern for the White House and we look forward to following her story as she continues her journey. She will be enrolling in the Master of Public Policy program at the Harvard Kennedy School this fall 2014.