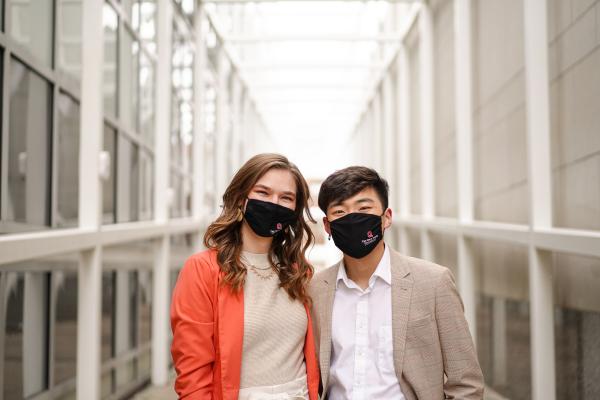 In March 2021, Jacob Chang and Anna Valerius—two undergraduate students majoring in Political Science—were elected President and Vice President of Undergraduate Student Government (USG) at Ohio State. While neither Jacob nor Anna entered college studying political science, both believe that their education has contributed paved their path to becoming the top representatives of the Ohio State undergraduate student body. Their identities and life stories having led them to pursue the nomination to run for president and vice president of USG with the aim of creating lasting change at Ohio State.

Chang, an international student from China, found his science in political psychology and campaigns/elections after enrolling at Ohio State as a computer science major. He believes, however, that switching to his major to political science taught him greatly about social justice and positive change. Chang also hopes to dispel stereotypes and not let microaggressions that he has experienced stop him from setting his sights on the USG presidency and to serve as an example for others that they too can have their voices heard. As president, Chang hopes to advocate for the entire student body, especially international students. After graduating, he hopes to be a civil rights attorney.

Valerius is a first generation college student who entered college with a self-described "survival mindset" towards choosing her major. Valerius’ personal interest for running stems from wanting to empower others to be more involved. After changing her major from arts management to business, she realized her passion lied within issues related to financial literacy—a concept with which many families, especially those with first generation college students, struggle. Valerius then realized that the common thread between all of her interests lied in policy, leading her to change her major to political science after spending time in the University Exploration program. She believes that her education, and role as Vice President in USG, allows her to combine her academic side with her creative side.

The Department of Political Science is proud of Jacob and Anna's commitment to Ohio State's student body, and that their education has contributed to their interest in advocating for all Buckeyes, especially international and first generation students!