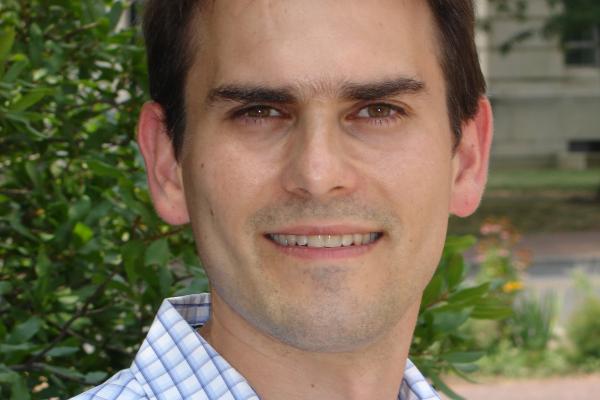 Political science professor Alexander Thompson recently attended the United Nations Conference on Climate Change (COP 21), held in Paris from November 30 - December 12, 2015. Here he discusses his experience at the summit and the ways it has impacted his research.

Q: Please tell us about your recent research trip to Paris.

It was an exciting and productive trip.  I attended the Paris COP as an accredited NGO “observer”.  This allowed me to sit in the rooms where the negotiations were taking place and also to attend various NGO events that were planned alongside the conference itself.  There were 195 countries taking part in the negotiations and about 30,000 participants from civil society, so the sheer scale and range of activities was remarkable.

Q: What are your thoughts on the agreement that came out of the COP21 summit? What are the strengths and weaknesses? Are there any important aspects that have not been covered by the media?

The Paris Agreement was a better outcome than most people expected.  A few years ago, the global climate regime was on life support and there were fundamental disagreements about how to move forward beyond the Kyoto Protocol.  The greatest strength of the Paris Agreement is the widespread participation in reducing greenhouse gas emissions: 187 countries have pledged to reduce their emissions.  This includes the world’s two largest emitters, China and the United States, countries that have never committed to emissions reductions in past climate treaties.

The main weakness of Paris is that it’s only an agreement on paper at this point.  Whether and how well it’s implemented remains to be seen.  It will be up to each country, with its particular configuration of political and economic constraints, to figure out how to design policies to achieve reductions in emissions.  There seems to be more political will than in the past to tackle the climate challenge but there are still plenty of obstacles and incentives to shirk responsibility.

Media reactions to the Paris Agreement were very positive and tended to focus on the issue of mitigation, that is, the aspects of the agreement that relate to reductions in greenhouse gas emissions.  However, the most interesting political story in Paris was the diplomatic haggling over the issue of “climate finance.”  Robust participation by developing countries in the climate regime is critical because they will be responsible for most future emission and because the most serious impacts of climate change will take place in poorer countries.  However, developing countries are reluctant to pursue costly policies without some help.  They insisted on obtaining significant commitments from richer countries to supply aid, loans and investments to support adaptation and mitigation efforts in the developing world.  These negotiations over climate finance were the political linchpin for a successful outcome in Paris.

Q: Which courses do you teach in the Department of Political Science? What are your areas of research?

I teach a variety of courses at the undergraduate level.  In addition to Global Politics, which is our introduction to the field of International Relations, I teach two upper-level courses: The United Nations System (4331) and International Environmental Politics (4335).  Both are popular and fun to teach.

Q: What is it about this topic that interests you? How did you become interested in this topic?

I enjoy conducting research on contemporary and policy-relevant issues—and climate change certainly qualifies!  For me, it has been fascinating to watch the global climate regime unfold before our eyes and to study the domestic and international political factors that shape its evolution.  Climate change is so interesting politically because its causes and solutions implicate almost every sector of the economy and so many aspects of our daily life, from the energy we use to the cars we drive to the choices we make as consumers.  That’s why it’s such a difficult political issue.

Q: How will this trip influence the courses you teach or the research you are doing?

My recent trip to Paris has contributed in various ways to my research.  If you want to understand an issue, there is no substitute for observing it firsthand and talking to those who are involved.  It serves as an important “reality check” that can’t be achieved by staying in Columbus.  I have a more accurate and sophisticated understanding of the international politics of climate change and also made a number of connections that will help me with my research in the future.  The trip has also helped my teaching by giving me real-world and sometimes colorful anecdotes to highlight points I’m trying to make in class.

Q: Do you have any advice for students who are interested in the politics of climate change? Any suggestions of resources to check out?

Climate change is a hot topic so some students and researchers find that there’s actually too much information out there.  The website of the Climate Secretariat (http://newsroom.unfccc.int/) does a good job posting documents related to ongoing negotiations and implementation of climate agreements.  There are some research institutes and think tanks that provide reliable research and information on climate change and climate policy, including the International Institute for Sustainable Development, the World Resources Institute, the Climate Policy Initiative, and the Center for Climate and Energy Solutions.  These would be good places to start.