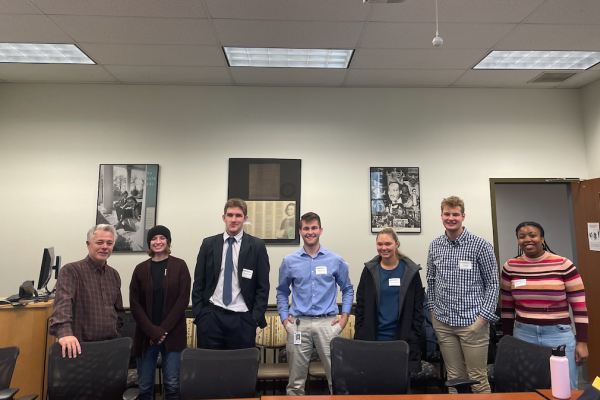 On December 2nd, students from Internship Coordinator Troy Markham's course, PoliSci 4191,  joined together to talk about their fall internships.

Many students worked in the Ohio House or Senate. Such students included:

TJ Kirila, who worked for the Ohio Senate's Democratic Caucus

Brandon Kopkas, who worked in the Ohio Senate

Genevieve Re, who worked for Representative Latyna Humphrey

Brennan Shanesy, who worked for Speaker of the House Representative Robert Cupp

Varun Thotli, who worked as a communications intern in the Ohio House

Isabel Bryer, Cristina Maze, Steven Sturges, and Maggie Trauber were all participants in the State Government Internship Program. The State Government Internship program provides sophomores, juniors, and seniors a semester-long internship in the Ohio General Assembly. The program allows students to gain experience working in state government while earning college credit. Additionally, students selected for this program receive the Gluck-Asher financial award,  named after Barry Gluck, a student of Herb Asher's, and Herb Asher, professor emeritus of political science. Gluck donated in honor of Asher and to given students an opportunity to start a career in public service.

Students Eve Beiting and Keegan Fay worked more at the federal level, with Beiting working for the Department of Justice's Consumer Branch and Fay working for Senator Sherrod Brown of Ohio. Student Noor Zaki took interned at the local level in the Office of Economic Development for the City of Upper Arlington, a city just outside of Columbus.

Congratulations to our students for completing their internships this fall!

If you have an internship and want credit, check out our internship page.

If you are interested in finding an internship, please reach out to Troy Markham, markham.4@osu.edu.