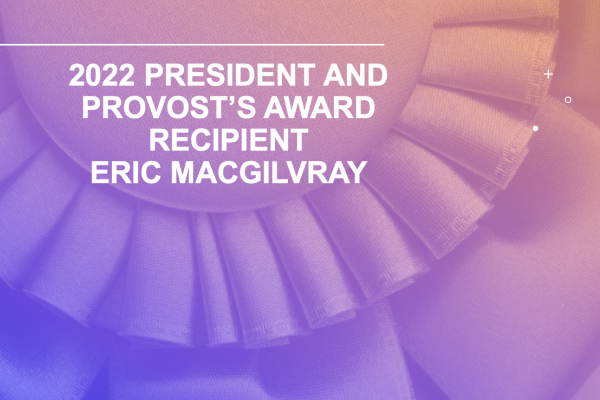 This past March, Professor Eric MacGilvray was surprised during a faculty meeting with the announcement that he would receive the 2022 President and Provost's Award for Distinguished Faculty Service.

According to the Office of Academic Affairs, "the award recognizes up to three tenure-track, clinical, or research faculty members who have been at Ohio State for at least five years.  Their contributions to the development and implementation of university policies and programs, through non-administrative roles, have been extensive and have made documentable impact on the quality of the university." 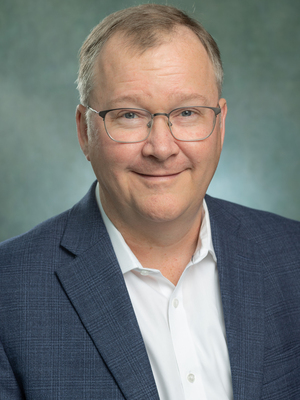 In reflecting on his experience at Ohio State, he expressed gratitude for the support he has received.

"The Political Science department here was – and is – a great fit for me intellectually. I’m especially grateful for how supportive OSU has been of my efforts to build programs and pursue initiatives in my various areas of interest – which I guess is why I’m getting this award!”

One of the programs that MacGilvray was instrumental in building is the Philosophy, Politics, and Economics (PPE) major. The major allows students to train in the foundations of the three academic disciplines and to use those tools to address important social and political issues. MacGilvray led the team that designed and got approval for the major.

When asked to reflect on his proudest teaching accomplishment at Ohio State, MacGilvray said, "The one that’s easiest to talk about, although it only partly has to do with teaching, is the PPE major. It was a lot of work to get everyone pointed in the same direction across three departments and to push everything through the University approval process, and it’s been incredibly rewarding to see the major grow so quickly and attract such terrific students."

MacGilvray added, "But the honest answer is that my proudest teaching moments happen in the classroom, on any day where I feel like I’ve managed to get the students as excited about the ideas as I am."

Another initiative that MacGilvray has been involved with at Ohio State is the COMPAS (Conversation on Morality, Politics, and Society) Program, which he co-founded and has coordinated four times. COMPAS, which is sponsored by the Center for Ethics and Human Values, is a year long series of events based on a chosen theme. The theme for 2021-2022 was Markets and Open Society, and he has previously coordinated COMPAS programs on Religion in Public Life, What Is America?, and the COVID-19 pandemic. The COMPAS program brings world-class speakers to campus, partners with other University units, and engages in outreach efforts to the broader Columbus community.

Outside of leadership roles in university programs and initiatives, the President and Provost's Award for Distinguished Faculty Service recognizes faculty that are actively involved in research and scholarship. MacGilvray is set to have his third book, Liberal Freedom, published by Cambridge University Press this August.

"The book starts with the observation that we seem to be losing the ability to talk to each other constructively across lines of political disagreement," MacGilvray noted. "You might think that liberalism – small ‘l’ – would be the political ideology that’s best positioned to respond to that problem, since liberals have always valued open mindedness, toleration, and free and open debate. But academic liberals these days, under the influence of the philosopher John Rawls, tend to focus on trying to identify basic political principles – principles of justice – that every reasonable person would supposedly endorse. That’s a pretty bad way to start a conversation with people who disagree with you, and it’s not an approach that the most important liberals of the past – thinkers like Alexis de Tocqueville, John Stuart Mill, and John Dewey – would have recognized as ‘liberal.'"

In discussing the aims of the book, MacGilvray focused on the meaning of the two concepts found in the book's title.

"I argue that we should focus on liberalism’s roots in the value of liberty, or freedom. Liberal freedom means two things: on the one hand making sure that our leaders are accountable to us, and that we’re accountable to each other, for the conditions under which we live; and on the other hand carving out a space where we’re not accountable to anyone else for what we do unless we choose to be. Those two kinds of freedom – republican freedom and market freedom, as I call them – are often at odds with each other, and a liberal politics is largely a matter of trying to strike the right balance between them. So liberals share a basic set of values, but they can still disagree – sometimes sharply! – about what those values require of us in practice. That’s what makes liberalism such a good platform for constructive engagement across lines of disagreement."

Congratulations on this award and on your upcoming book, Professor MacGilvray!