Careers after a Political Science Degree: A Speaker Series with Guest Miriam Browning 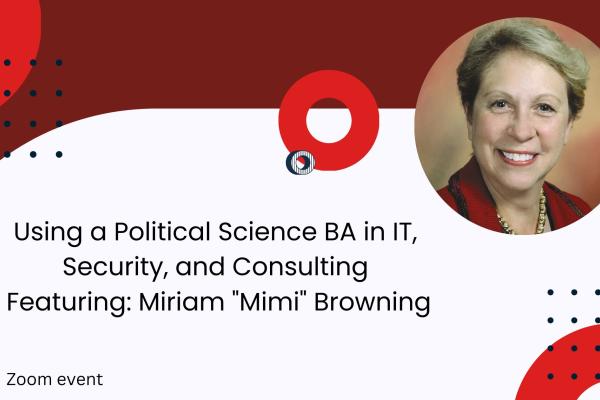 Students are invited to the talk: Using a Political Science BA in IT, Security, and Consulting

At the beginning of talk we will have Mimi answering some pre-determined questions about her career journey and her time at Ohio State. The talk will end with students getting the opportunity to ask questions.

Miriam “Mimi” Browning is a retired senior information technology executive. Mimi has served in influential IT positions in the Office of the Secretary of Defense as well as the Department of the Army. She pioneered programs in network security, knowledge analytics, and IT career management. While at the Pentagon, Mimi received the honorable Presidential Rank Award as well as the prestigious DoD Distinguished Civilian Service Medal.

Mimi is a member of Ohio State University’s Political Science Department Advisory Board and the top sponsor and founder of the Browning Internship Fund. She received her BA in Political Science at Ohio State in 1965. She went on to obtain an MSA in Information Systems from George Washington University in 1976. Mimi is a graduate of the US Army War College and the National Security Studies Program at the JFK School at Harvard University. Mimi and her husband currently reside in Alexandria, Virginia.