Careers after a Political Science Degree: A Speaker Series with Guest Michael Cavanaugh 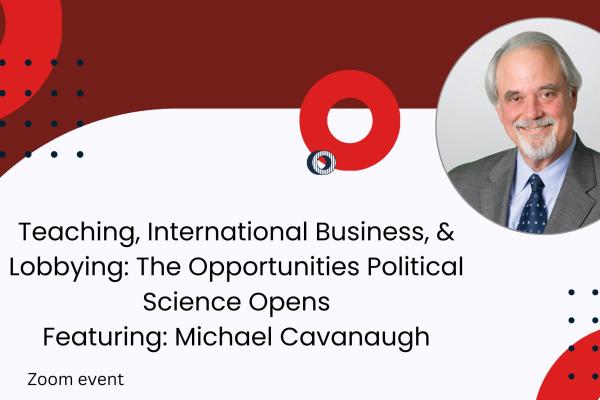 Hosted by the Department of Political Science

The beginning of talk will have Michael answering some pre-determined questions about his career journey and time at Ohio State. The talk will end with students getting the opportunity to ask questions.

J. Michael Cavanaugh is an energy and international transportation lawyer and lobbyist. He currently works in Washington DC for the international law firm, Holland & Knight, as part of their Energy and Natural Resources Team.  Michael represents clients in various industries, such as electric utilities and the international ocean freight and logistics industry, and trade associations for the cruise line industry and international electronics manufacturers.  Michael’s clients also include several universities, which he assists with international transactions and overseas branch operations.   He has also been a lobbyist for several foreign governments, most recently Ethiopia.

In addition to this, Michael teaches international contracts as an adjunct professor at American University, Washington College of Law. He previously taught international law and privatization policy at the Institute for Legal Practice Development in Rwanda. Michael also advises and serves on the boards of several non-profit institutes, including Davis-Akilah College in Rwanda, and is involved in several sustainable agricultural and renewable energy start-ups in the United States and East Africa.

Before entering private practice, Mr. Cavanaugh served as a lawyer at the United States Maritime Administration in Washington from 1974 to 1977 and was the agency's Great Lakes Region Counsel from 1976 to 1977. Michael currently lives in Virginia with his wife, with whom he has 4 sons, 3 grandchildren (plus one on the way), and a great-granddaughter(and two horses).